I have always been fascinated by people who are brave enough to live alternative lifestyles.

By alternative, I guess I just mean different from the upper middle class suburban existence of my San Francisco Bay Area childhood. It’s not like I naively think that most people have the option of living a stable suburban life but choose not to do so in favor of something “more interesting”; I'm just saying that I yearn to be brave enough to live a somewhat alternative lifestyle even though I have the option of going down the route has been laid out for me.

I am hungry to observe and test many different ways of being alive, which is why I am happy with my somewhat eccentric job as a cruise ship singer, through which I meet quirky and adventurous people from all over the world in a unique setting. It was through the suggestions of a couple of these folks that I discovered WWOOF, or Willing Workers of Organic Farms. This organization pairs you up with an organic farm anywhere in the world, and you can volunteer your labor there in exchange for food and shelter. Since I have been yearning recently to help people (singing for spoiled tourists on cruise ships isn’t exactly philanthropic) and since, as I said, I am fascinated with alternative lifestyles, WWOOF sounded like the perfect way for me to spend a little bit of my time in between ship contracts.

When my good friend Caroline announced months ago that she was planning on moving to Australia for a year, I thought about how much I have always wanted to travel to the Land Down Under. In college, I used to fantasize about working on a wildlife preserve there for a couple of months or something so that I could get a feel for what I had long considered to be the highlight of the country: nature (a.k.a. “the bush”). Then, it hit me: I want to help people. I want to observe alternative lifestyles. I want to go to Australia to spend time in nature…

Voilà. I’m going to “WWOOF” there.

Once my mind was made up, I enthusiastically informed Caroline of my idea. We spent months planning, applying for a WWOOF membership, contacting farms until we found hosts, deciding what to pack, etc. Now, finally, we are here.

After a thirty-hour journey involving multiple flights and obscenely long layovers, I arrived in Cairns, Australia at 11pm on Oct. 3, utterly exhausted. Luckily, Caroline and I had scheduled a little bit of recovery time into our itinerary, so we nursed our jet lag for a couple of days in a kitschy “girl’s hostel.” We were planning on meeting our host couple, Ned and Dee, yesterday on Oct. 5, but we had been calling them every couple of hours since the early morning and we weren’t getting an answer.

“Well,” I finally said to Caroline a couple of hours before the bus headed in their direction was to leave, “Let’s just hope they meet us at the bus stop…” After we began our journey to Mareeba, a town about an hour and half inland from Cairns, I sat with my headphones on, writing in my spiffy diary that I bought specifically to record my Australian adventures.

“I am actually feeling really nervous right now,” I wrote. “I have no clue what we are getting ourselves into. The woman behind us on the bus just winced when we told her that we were about to work on a farm and not get paid…is this a bad idea? Is the work going to be hard? What if Ned and Dee turn out to be serial killers?!”

Before I knew it, the bus rolled to a halt, and the driver (who was sitting on the right side of the vehicle, might I mention) called out, “Mareeba!”

I stuffed my diary into my backpack, threw that and my duffel bag over my shoulders, and followed Caroline off the bus. There was only one old woman sitting at the bus stop, and, to our horror, the man stepping off the bus in front of us said, "Hi, Mom!" As the driver opened the luggage compartment underneath the bus to pull out Caroline’s and my large suitcases, we looked around the gray, deserted little town, and I felt my heart sink. “They aren’t coming for us,” I said to myself, panicking, “and the next bus back to Cairns isn’t until tomorrow afternoon…is there even a hotel around here?!

Just as frantic tears were pricking the corners of my eyes, a middle-aged couple somewhat magically appeared from around the back of the bus. I eyed them hopefully. “Ned and Dee?” The woman, who had long, scraggly brown-and-gray hair and crow’s feet around her pale eyes, nodded. Relieved, Caroline and I shook her hand, and then moved to greet her husband. The first thing I noticed about this sinewy man was his incredibly retro 70’s glasses. I could also tell that he was relatively shy—he didn’t speak much, and he appeared awkward when trying to participate in conversation.

The couple helped us hoist our excessive load of possessions into the back of their 4-wheel drive, but Caroline said she didn’t want to leave the town until she had taken pictures of the run-down train station near the bus stop. “This place is so beautiful!” She exclaimed cheerfully, and as she passed me, she whispered, “I love this. I love them.” I wanted to share her enthusiasm, but truthfully, I was terrified. Ned and Dee seemed nice, but a little strange. And I didn't think Mareeba was beautiful...I thought it was, frankly, a shithole. But I tried to swallow my negative impressions, and Caroline soon returned to the car so we could head out of Mareeba.

Over the course of the drive to their remote 300-acre property, I began to feel much more comfortable with the couple. They stopped several times at scenic spots so that Caroline and I could take photos of the sunset, and Dee even pulled out a bottle of sparkling Italian wine at one point and poured each of us a cup (although I suspect that there’s an open container law in this country, I found her behavior amusingly indicative of a certain free-spiritedness). She also told us that she and Ned make their own soap and fruit wines, which I thought was pretty cool. 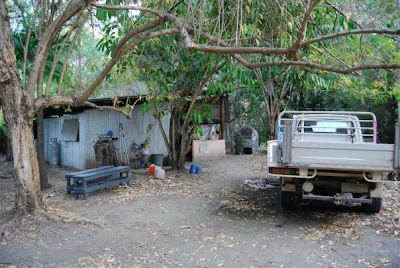 However, when we pulled up to their dwelling, my nervousness came flooding back. Ned and Dee don’t live in a house. They live in a structure made entirely out of aluminum panels and logs. This structure has no door, hardly any walls, and no screens except for the mosquito netting around the couple’s bed (which is sectioned off by bookshelves into a bedroom of sorts). I was amazed that access to the Internet could exist in a place like this.

“This is where you’ll stay,” Ned said, leading Caroline and I to a nearby trailer. “All of the electricity is solar, so make sure not to leave the light on for too long.” Caroline and I thanked him and entered the tiny space, which Dee and Ned had referred to as “a caravan.” There were two lumpy double beds, one on either side of the dusty trailer, and a couple of built-in drawers that contained a mishmash of objects that seemed to have once belonged to a young girl (we found out later that one of Ned and Dee’s daughters had grown up with the trailer as her bedroom). Caroline sat down on the bed closest to the door, smiling dreamily. “I am obsessed with this.” I wasn’t sure what exactly she was referring to, but it took me a couple of seconds to realize that she wasn’t being sarcastic. Not wanting to acknowledge my feeling of dread and—simultaneously—the fact that there was a shiny black beetle roaming around the comforter behind her, I responded with the handy smile-and-nod.

“Um…want to share a bed?” I croaked. I decided to point out the insect, and I then motioned to the other bed, which looked cleaner. She laughed. “Yeah, that sounds good. That way, we can use this bed for our suitcases…I don’t know where we would put them otherwise!” 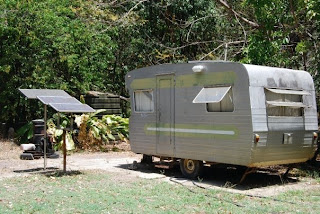 After lugging our stuff out of the car, up the trailer steps and onto the bed, Caroline and I stumbled through the dark to Ned and Dee’s “dining room” a few yards away. Dee stood up and began to prepare dinner in the attached kitchen, which miraculously contains a sink and an old-fashioned refrigerator that you have to kick to properly close. “Let me show you the bathroom,” Ned said. “Here is a little torch for each of you.”

Flashlights in hand, the three of us walked outside (not that we weren’t basically outside while in their house) and Ned walked us over to a building that looked like an over-sized shed. He opened the door, revealing a shower in a battered red tub. “The hot water comes from our stove,” he stated proudly. “Cool!” I responded, trying to participate. “And where does the water come from?” “It’s piped in from the river,” he replied matter-of-factly. I innocently assumed that it was then somehow filtered before touching the heads of showerers... 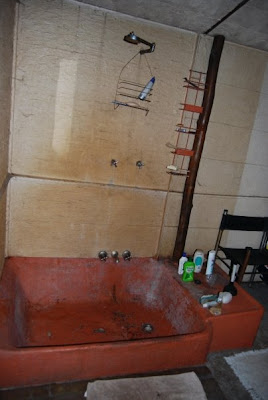 “And down that way is the outhouse,” Ned gestured. I was expecting them to have an outhouse, so I wasn’t phased by this information. “Come down there with me, Caroline,” I said as Ned returned to the house. “Let’s find it.” Gripping each other’s arms, we trudged down the path, the dim light from my flashlight guiding the way. Suddenly, something moved in the brush near our feet.

"AAAAAHHHHH!" Caroline yelped, leaping backwards. "What was that?!” (Let me just interrupt here to inform you that, over the past few weeks, Caroline has done an unnecessarily large amount of research on the many dangerous and/or poisonous creatures that call Australia home, so I knew she was jumpy about being attacked by a funnel web spider, taipan, irukandji, crocodile, or cassowary. Death by Koala—